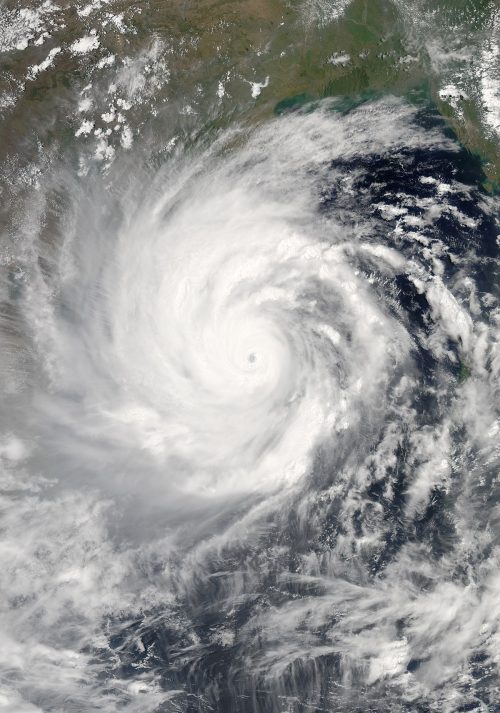 The Rohingya refugee and Bangladeshi host community population in Cox’s Bazar district are extremely vulnerable to the impact of natural hazards such as floods and cyclones.  A small storm-surge could inundate large areas of land, and impact tens of thousands of people.  Despite the incredible power of the super-cyclone in the Bay of Bengal on the 18th & 19th of May, the power dissipated, and the track moved over 150km further west.  The people in Cox’s Bazar certainly experienced rough weather, but it was very minor compared to the impact further north in Khulna and West Bengal.

The #DisasterGap is time between the impact of a natural hazard, and the rescue/medical/humanitarian response arriving. This may be hours, or even days in remote areas.  This gap will be filled by the #SpontaneousResponders who may have little or no training – they are simply the people who were there at the time.

Cox’s Bazar district is a peninsula with the Bay of Bengal to the west, and the Naf River to the east.  This means that there are few access roads stretching northwards from the refugee camps. These roads are at risk of flooding and structural damage in the event of a significant storm surge, and access to the refugee camps for any responding agencies is likely to be restricted.  In this context, the #DisasterGap is likely to be large.

In 1972, the Cyclone Preparedness Programme (CPP) was introduced as a joint venture between BDRCS and the Government of Bangladesh.  Since then it has expanded significantly, and today there are over 55,000 CPP volunteers who stand ready to help their local community prepare for and recover from the impact of a disaster.  In the 34 Rohingya refugee camps, there are 100 volunteers in every camp who form part of the CPP team, providing safety cover for over 850,000 refugees at risk from a cyclone. With no evacuation plans for the camps, these people are the #SpontaneousResponders for the refugee population.

UNHCR is funding training in the camps that are most vulnerable to the risk of flooding.  The specialist training taught the volunteers how to respond safely to help people in a flooded environment. The training includes: hazard awareness; the correct use of buoyancy aids; safe wading techniques; swimming for self-rescue; the use of throw-bags as a rescue tool; wading with sleds for evacuating vulnerable people.

Thankfully during Cyclone Amphan, none of these skills were needed in Cox’s Bazar.  However, I was heartbroken to hear that further north in Kalapara, a boat carrying CPP volunteers capsized and the CPP team leader, Shah Alam, died. This tragic death highlights the risk that anybody takes when responding during a flood or storm event.

This article is dedicated to the memory of Shah Alam, who died on the 19th May 2020.

This site uses Akismet to reduce spam. Learn how your comment data is processed.